Jimbohalo10 ✭✭✭
May 2018 in Q&A and Discussions

When you have downloaded Edge extension enable this as in picture by switching the slider on. 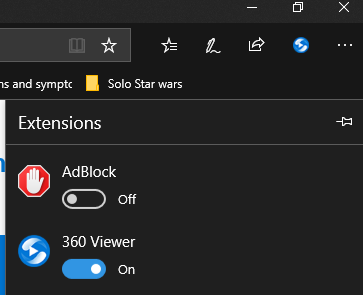 To open the link to Solo: A Star Wars Story 360

This has to be included with any mention of Disney products :- With Solo: A Star Wars Story, and the help of ILM, this iconic moment was captured in full 360º, putting you the viewer at the center of it all. Watch it all unfold with Han, Lando, and some new and old friends. This experience is a truly never-before-seen event. Solo: A Star Wars Story 360 was created in association with ILMxLAB. The film will be in cinemas on 25th May 2018

Put on your WMR headset and open the cliff room.

Open this link
and save to Edge Favourites Bar, in the WMR Headset, press the Windows Holographic menu key or motion controller key and select Microsoft Edge.
Click on the Favorite Bar link Solo: A Star Wars Story 360

In Holographic Edge now use the mouse or the motion controller to select the WMR headset icon, then the full screen, far right, icon to fill screen

The screen will clear and change to 360 / 3D viewing. You can go back to beginning by dragging slider back.

Press the escape key to go back from full screen and select other 360 videos using the YouTube search bar. In Holographic Edge now use the mouse or the motion controller to select the WMR headset icon, then the full screen icon to fill screen