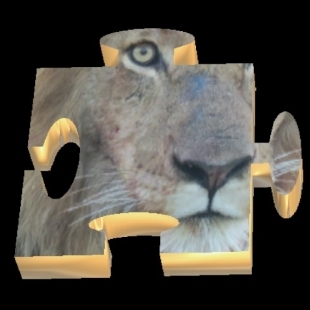 Holographic Puzzle is a jigsaw game for the HoloLens. Like a "normal" jigsaw puzzle, the goal is to connect the jigsaw parts correctly and to see the whole image at the end.

My name is Lukas Werz and I'm a master-degree student in Information and Communication Technologies at the Interstate University of Applied Sciences of Technology Buchs, Switzerland. I have been developing Android applications for almost three years.

As an introduction in my master-thesis, I was advised to build a simple Jigsaw-Puzzle for the HoloLens, which I've finished now. You can find and download the application in the store.

Now I want to share my experiences, my problems and part of my solutions. I'm happy if someone reads this and gives some feedback, suggesting what I could change in my next project, my master-thesis.

I assume that the most people reading this are developers, so I will not comment components of the Holographic Academy. If you need more information, just let me know.

Because text size is limited, I split up my description in several parts: