I am trying to alter the position of an object that has a world anchor/spatial anchor. I have two functionalities that each removes the anchor, alters the position and then attaches a new anchor. Only one of the functions work, though to me they seem to do almost the same thing.

I'm doing a simplistic 3D app where the aim is to be able to position a number of spheres by dragging them with a gesture, with the spheres remembering their new position the next time I open the app.

I started with some prefabs and scripts from HoloToolkit-Unity. To introduce being able to reposition the sphere by dragging it, I attached Handdraggable.cs to the sphere. For interaction with the spatial map and position persistence through world anchors, I borrowed that functionality from TapToPlace.cs .

My element hierarchy, where SphereIcon is the sphere: 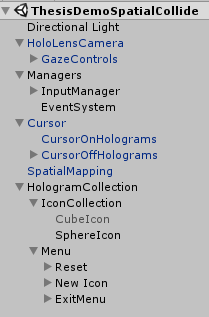 My problem is with a short reset function I wrote, which is supposed to reset the position of the sphere to where the user is looking. It worked as intended when I accidentally had attached a rigidbody to the sphere, which breaks the world anchor functionality. When I realized that and removed the rigidbody, everything worked except reset. When resetting, the sphere can be seen as a flicker in the intended position, then it returns to the old position.

The code for dragging the object

I have borrowed the code for the anchor management from the OnInputClicked method in TapToPlace.cs (line 126).

I have a WorldAnchorManager that is initiated as follows:

The dragging is started by doing a hold gesture, the anchor on the object is removed so that the position of the object's transform can be altered:

StartDragging() does some setup, and UpdateDragging() is called from Update() to change the position of the objects transform as the user drags their hand. There are a lot of calculations in UpdateDragging() ending with:

The code for ending the dragging by releasing the hold gesture, and attaching a new anchor to the sphere:

The code for reset

The code for resetting the position of the SphereIcon:

By printing some trace printouts of the object position to Debug.Log I have figured out that this happens when I reset the position (if not stated otherwise, all of the following is done in the customized Handdraggable-script attached to the sphere):

There are always two Update() events with one correct and one incorrect position, as stated above. The incorrect behaviour is there regardless of debug printouts. The hand dragging functionality seems to work exactly as inteded, with the object remaining in the exact position as when the motion ends - not reverting to the position before the last that would be more in line with the error in the reset function. I haven't found any code that makes alterations of the position of the object's position or of the parents' positions which could interfere.

The reset and the hand dragging methods are both in the same script, attached to the sphere. The reset event is done by a message broadcast, either from the SpeechManager when "Reset" is spoken or from a script attached to a reset button when the button is clicked. The OnInputDown and OnInputUp triggered by the hand dragging motion is handled by one of the prefabs/existing scripts. I don't know if that makes any difference.

I have no idea why the dragging functionality behaves correctly but the reset function does not. Any idea of what the problem could be or what I could look at?