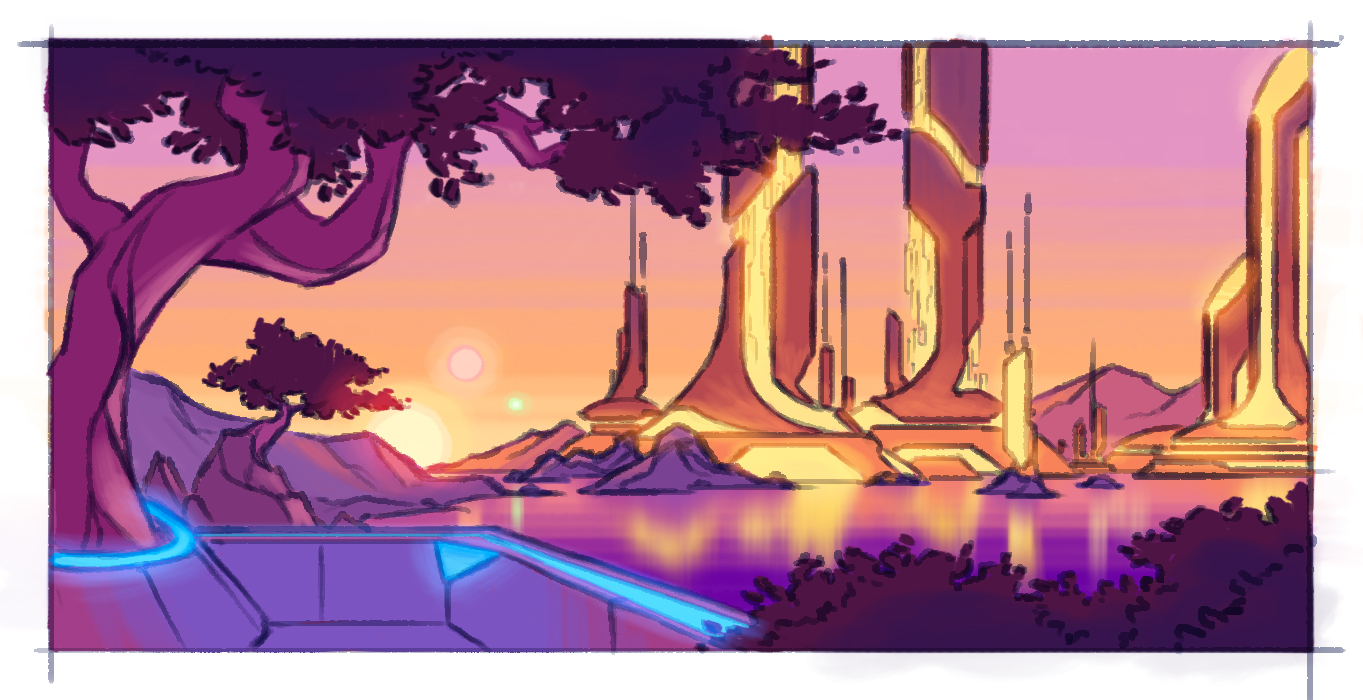 A view from the rural side of Alpha Synthetica. I'd like the areas outside of the colonial city towers to feel like Big Sur (Except on a newly settled planet with 3 suns 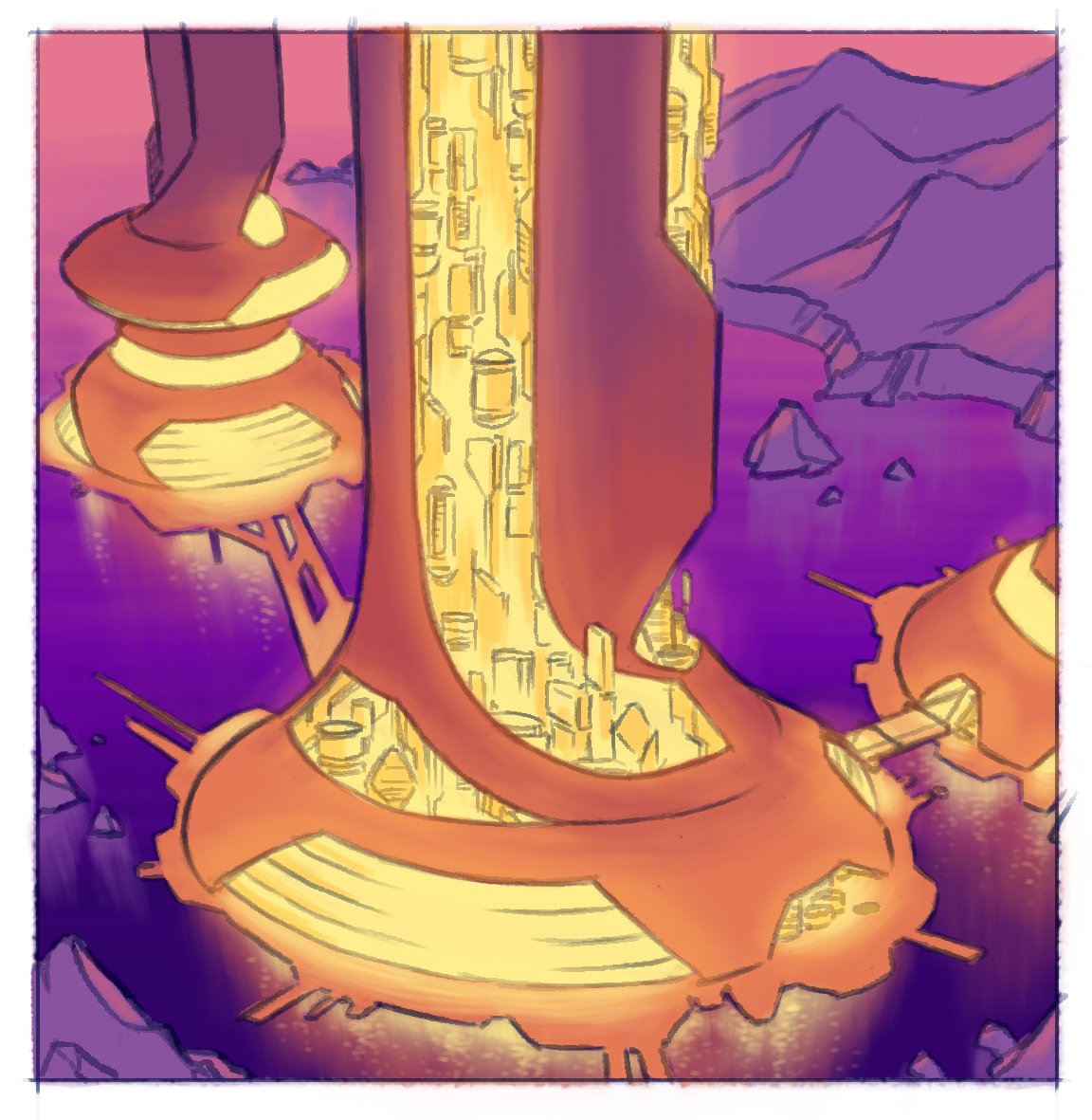 A close-up view of one of the colonial city towers. The giant towers support multilayered cities inside of them. 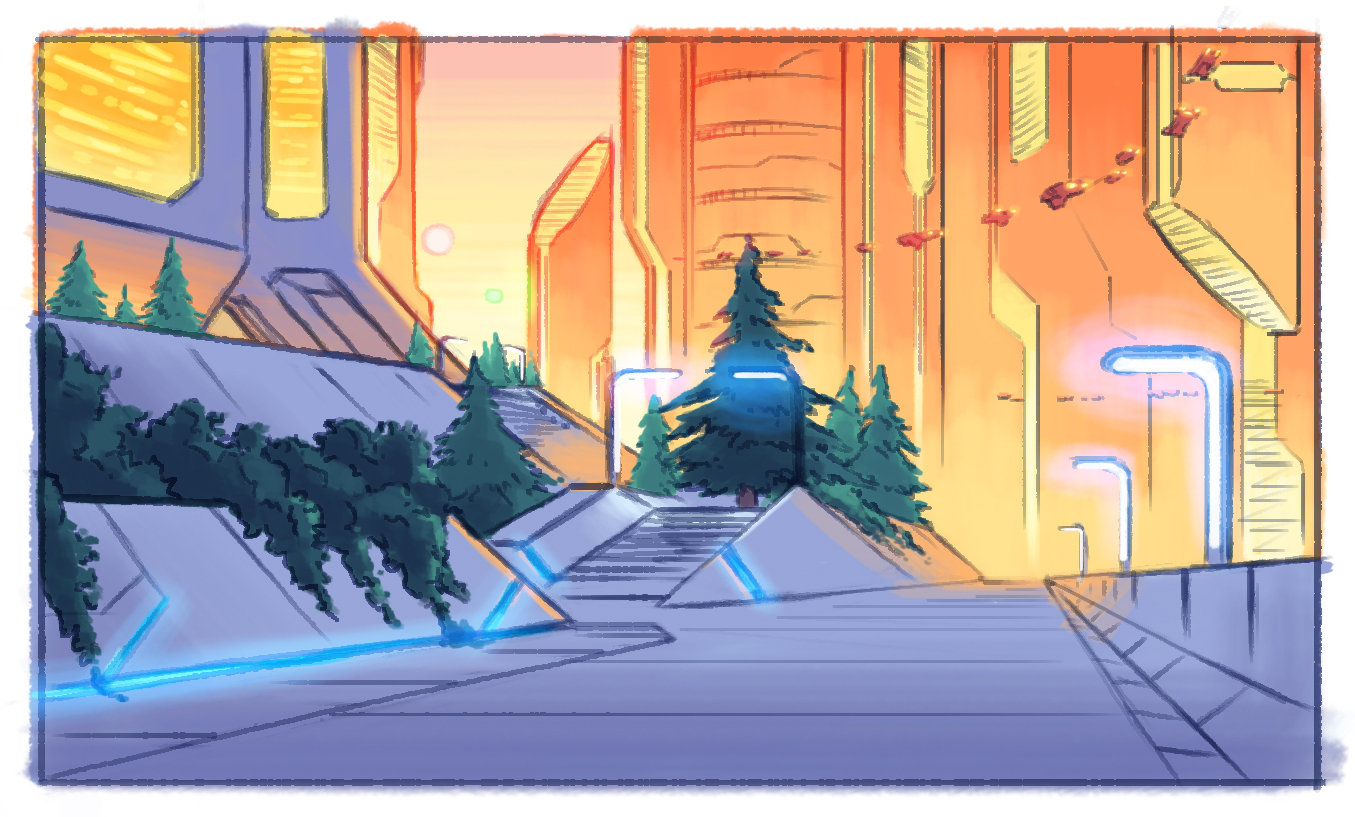 An interior view from one of the many levels inside of a city tower. The cities will have a mix of massive futuristic buildings, and open green spaces populated with trees and various plants. (Like a nicer, non nightmarish dystopian Blade Runner city 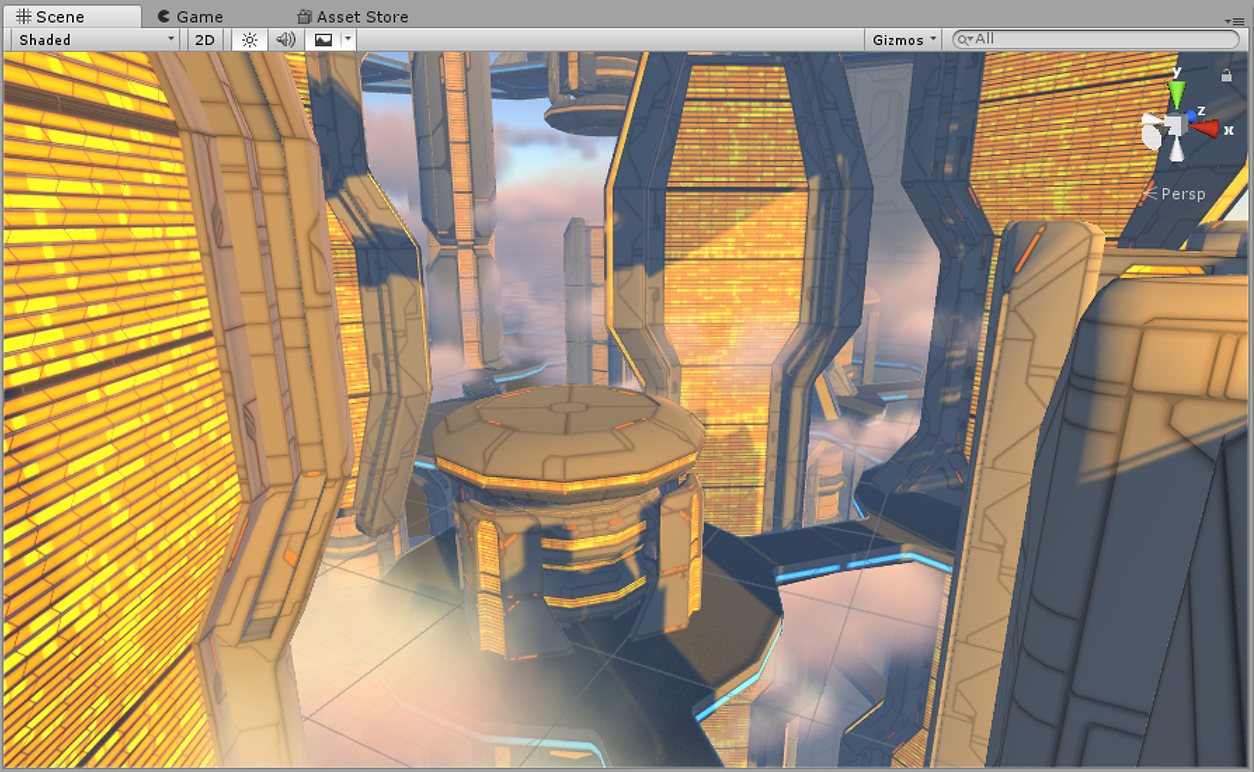 A screencap of my progress in Unity. The buildings and platform structures were modeled in Blender. The textures were painted in Photoshop. For now I'm keeping the look simple, as I haven't had much time to experiment with different shaders in Unity. Each building has 3 Levels Of Detail to help maintain 90 fps regardless of where the User is in Alpha Synthetica. I intend to create explorable interiors for each building further down the line. Further work on the atmospherics and the lighting is needed to match the color style of my concept sketches.
.
So, a little about me, and my first major development issue:
My background is in Animation (2D, and 3D) VR/MR development is new to me but I'm gradually picking it up. What I'm trying to say is that I'm a noob, but I'm hooked on VR, and I'm serious about creating for it.
So far the Mixed Reality Toolkit has provided some great tools, and is pretty straightforward to use (Even for someone completely new to this like me.) However, I'm hitting a brick wall when it comes to mapping the buttons on the Motion Controllers which I would like to assign some FPS style controls to. Which brings me to my first question. (Which I will also post in the Q&A Section too.)

My issue is with getting Unity's Vertical, and Horizontal inputs to work with the Motion Controller Thumbsticks. I've had some basic success with parenting the Mixed Reality Camera to an FPS Player Controller that I can control with the WASD keys on my keyboard...

But I'd like to map those controls to the Motion Controller Thumbsticks. Trouble is, I can't find where the right scripts are in the Input Manager. 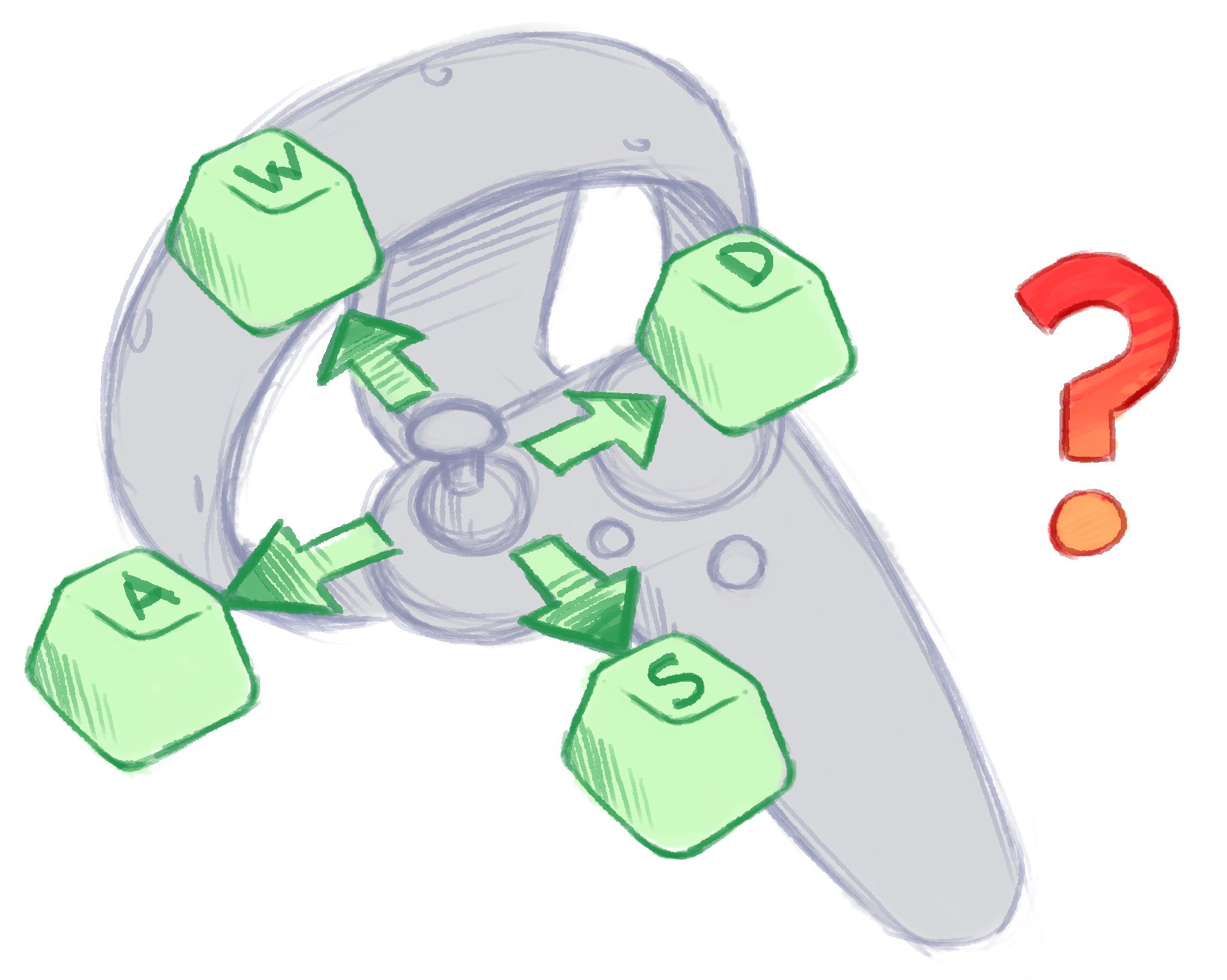 I did some digging around in the various demo scenes provided in the Mixed Reality Toolkit, but no luck so far. I'm just too new to all of this to make heads or tails of it, so if anyone here can help me out with this, I'd really appreciate it!
.
The FPS Controller Scheme
If/when I get around this Motion Controller button issue, here's how I picture my VR-FPS system working. (Any notes from you folks are welcome.)
.
Step 1 When the User is physically walking in the room, the FPS controller is parented to the Mixed Reality Camera on the X & Z plane. 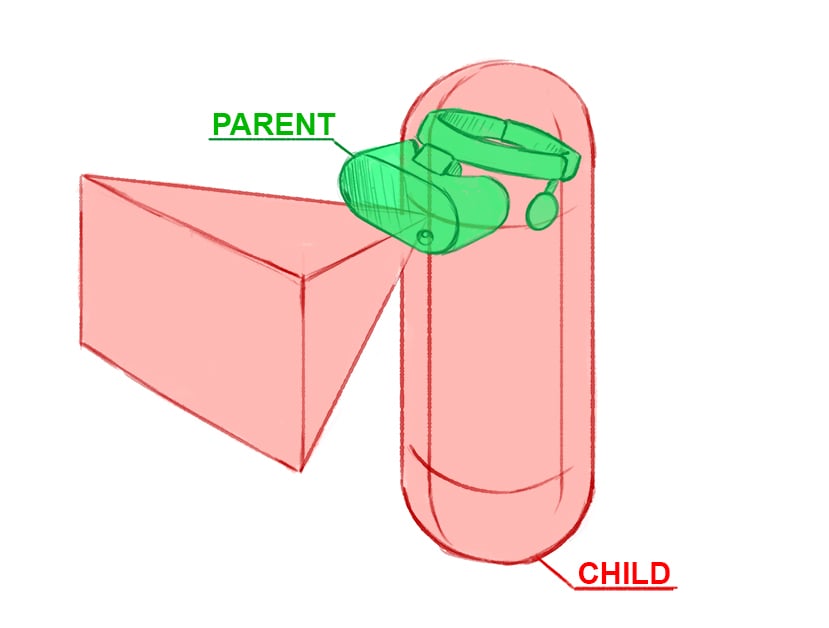 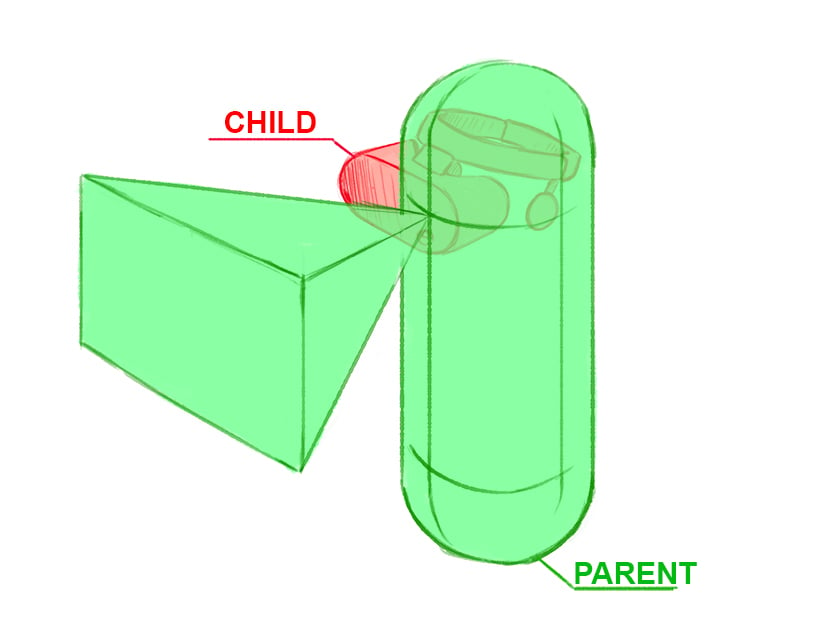 Step 3 The direction the User moves the Thumbstick determines the direction the FPS Controller moves in the Virtual World, and with it the Mixed Reality Camera. Like in an FPS game with WASD keyboard controls.

Step 4 ‎When the user releases the Thumbstick, the FPS controller returns to being the Child of the Mixed Reality camera as described in Step 1. The User can return to walking naturally throughout the room.

.
So, that's my project, and that's my first roadblock.
I hope this post wasn't too long, and I look forward to hearing from you folks.